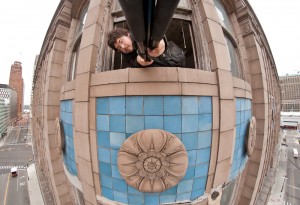 Sean was born and raised in a Detroit suburb, living a fairly normal life, until the age of 12, when he was exposed to a pre-Depression vaudeville theater that had been largely forgotten. Within a few years, he was captivated by the abandoned and neglected architecture around metro Detroit. On a mission, he set out to photograph these irreplaceable locations before they were erased from the planet, either by mankind or the elements.

As the major skyscrapers and buildings that he needed to visit and document started to dwindle, he branched out to other types of photography. Sean Doerr is a graduate of College For Creative Studies school with a bachelor’s of fine arts degree with a major in photography and a minor in entertainment arts (video). Armed with years of experience and a four-year degree to strengthen his skill-set,  Sean continues to work various jobs and commissions, shooting anything from weddings to buildings to portraits. In addition to photographs, Sean has served as a location scout for many feature films looking for unique settings that can only be found in Detroit, and has lectured at various locations about Detroit history and architecture.